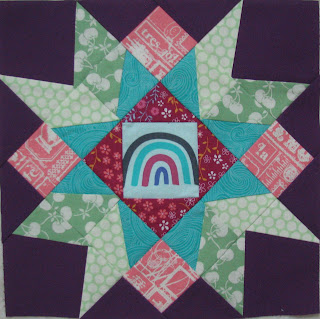 This block was both easier and more difficult than the other blocks I've made for this quilt.  A traditional version of this block is very straightforward, squares of the same size, and quarter-square triangles, all the same size.  Figuring out the measurements for a smaller block than the pattern called for was pretty simple.  But since I am making each of the blocks in this quilt wonky in some way, and because of the construction method of this block - joining diagonal rows together, there were a couple joined units that were tricky to figure out the math on.

I cut the center square and pink squares to size, and then the corner squares as well as all of the triangles a little large.  Combined with the wonky piecing I had a lot of units to trim down.  For the pink square and dark purple triangle units, I used a small square ruler to first trim along the sides of the purple triangles to line up with the square edges: 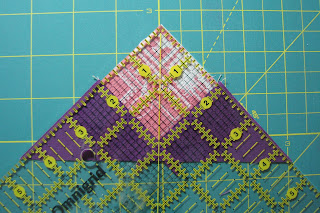 Then to trim the long purple edge, I used a larger ruler to measure a 1/4 inch from the edge of the pink square, using the 45-degree line to run along one side of a purple triangle, and the bold white line to run through the points of the square to make sure it was straight: 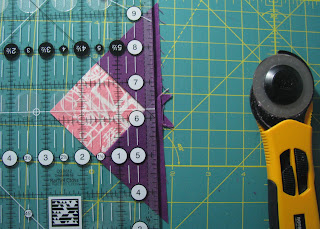 The outside corner units were more difficult to trim.  The purple square was larger than it should be and the triangles had been sewn on wonky, at different angles.  I ended up sketching out a paper template and using that to help with placing the second green triangle before sewing and then to help line up my ruler to trim afterward: 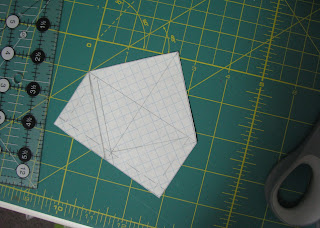 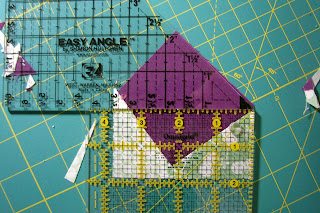 The photo above shows how I trimmed the sides of the purple "squares".  I used the small square ruler to measure the correct rectangle size on the bottom portion of the unit, and then lined up a triangle ruler along the top edge to cut at a 45-degree angle to get the side of my square.  To trim the other purple edge I would rotate the square ruler 90 degrees and line up with the left edge and then flip the triangle ruler, line up, and trim.

There were a lot of bias edges in this block, and because of making the corner units wonky I also ended up with bias edges on the outside corners of the block.  Those corner squares ended up pretty close to square but not perfect.

While it's not my favorite block I've made for this quilt, I do like it quite a bit.  The color scheme was pulled from the border fabric I have planned for this quilt.  So far I've been using darker pinks and lime greens, but it was time to start pulling in some mint green and lighter pink.  You can probably spy the green, pink, and blue flower in the border fabric that I used for this month's color inspiration. 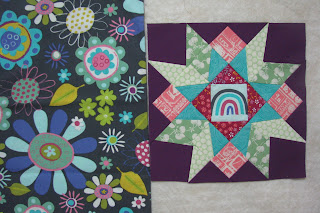 Linking up with Finish it up Friday.