A couple weekends ago I was thinking how my daughter really needed a new pair of pajamas.  I've been wanting to make her a nightgown, but was in the mood to make something that minute, so didn't want to take the time to trace a pattern, etc.

So while she was napping I grabbed a dress that currently fits her and was close enough in form to what I was imagining.  Then I went to the fabric closet and pulled out a pillowcase; purchased with a sheet set at a garage sale a while back for a few bucks and waiting to be re-purposed.

I laid out the dress over the pillowcase on my cutting mat, and just cut around it with the rotary cutter, leaving room for a seam allowance. 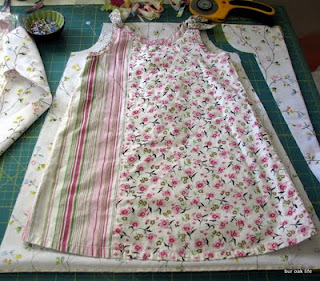 The dress fit across the width of the pillowcase; so I put the edge with a seam at the bottom of the dress, and the other edge at the top, so that there would be no uncomfortable seam over the shoulder.  Then I cut just along that seam at the bottom: 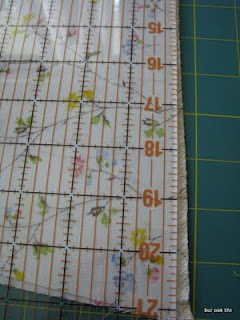 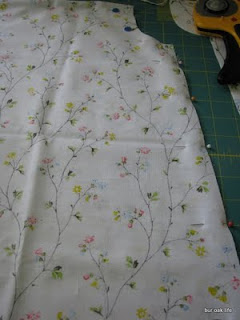 I pinned and sewed the two side seams - accidentally pinning and sewing through the armhole as well.  (Moving too fast...)  I used about a half inch seam allowance, pressed the seams open and then sewed down each edge.  There's probably a name for that, but I don't know what it is.
Next I narrowly folded over the fabric around the arm holes, twice, and sewed.  Same for the bottom hem. I think it was a this point that I realized the dress I had used as my template had buttons down the back; hmm - how to get this over her head...

I cut a slit from the neck in the middle back of the nightgown, and after she woke up from her nap gently tried pulling it over her head, cutting the slit a bit longer until it would go over her head easily.  My plan was to add a button and little elastic loop to this; but after zig-zag stitching the edges of the slit, I decided it was fine to just leave open, and probably more comfortable than having a button back there. 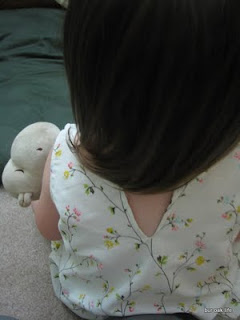 She didn't seem to mind and loves her new pajamas.  Now when I ask her if she likes a piece of fabric she asks me if I'll make her pajamas out of it - not a bad problem to have.
Posted by bur oak at 11:56 PM